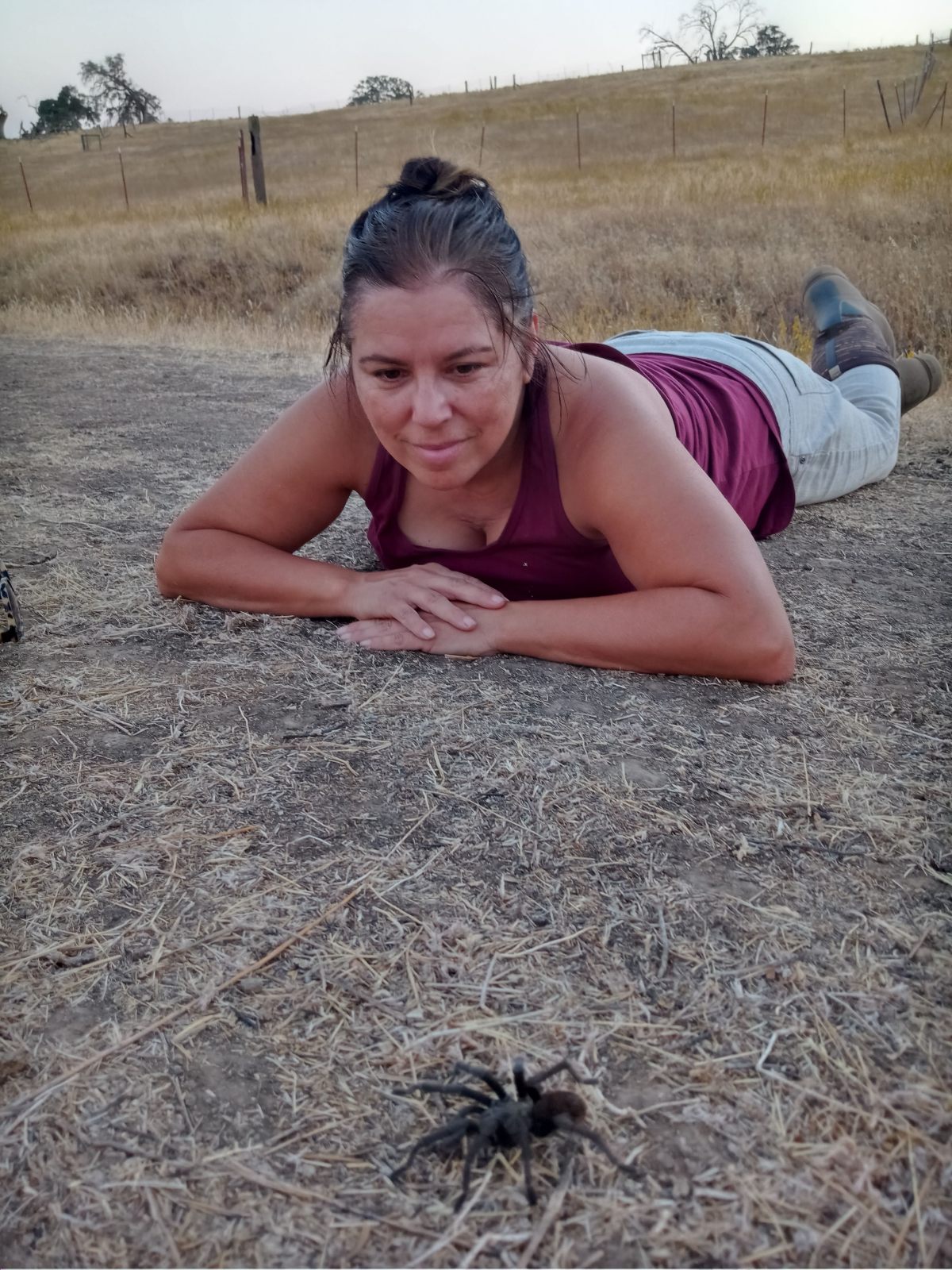 It is no secret among my friends that I LOVE spiders – especially tarantulas. Not only are they amazing predators eating their weight and more of flies and gnats, but they are a harbinger of Fall with its cooler weather. Oh my goodness, am I desperate for rain and cold.

David and I have been busily preparing for the Fall. In addition to building log dams in the Spring Creek, we have been chopping downed oak branches. Often, these large oaks will drop branches in an attempt to stay alive by needing less water. It leaves some of the trees looking lopsided and the ground covered in branches and leaves. The large thud can be frightening if it is unexpected. One of the large oaks dropped a very large branch unexpectedly. The tree looked really healthy, and I had hoped it would stay fully intact despite this horrid drought.

David has been pulling the branches from under the tree with a chain and truck. These last two branches (pictured above) were too heavy and too tangled for the truck to dislodge them and pull them out, so he has been carefully cutting them in place. He needs to be very watchful and not be under the canopy too long given the branches dropping. They call oak branches connected to trees but sagging toward the ground “widow-makers”. For real…

Instead of burning all wood material, we prefer chipping. Not only is it better for air quality, but it provides a (very) local source of mulch for around the plants helping the soil to retain precious moisture. We neatly stacked the logs so that they could be handled by the chipping vendor. A huge thanks to the Mariposa County Fire Safe Council for offering this chipping program as a way to reduce fire fuel load near homes. Often, the chipping jobs are too small for the large vendors or too expensive, so this program is a huge benefit for our community.

Once the pile of chips was complete, David and I began filling the Polaris, and I spread it within the planting sites. There were six loads in total. Dave gave up after two loads and sat on the porch with a beer watching me work. It was a well-deserved break for him after all the branch hauling and sawing.

It is no wonder Halloween mainstays are pumpkins and spiders. It is nearly October, and I have begun to see the webs floating through the air. On those webs are baby spiders lifting off from wherever to begin a new life in a new territory. The webs will get lodged in plants, trees, vehicles, structures – pretty much anything they come in contact with. And, that is where they will begin their new life. As I was watering and mulching, I saw several stuck webs on the plants. To be certain, we will have a solid line of defense against any bugs.

On my walk a week ago today, I saw two tarantulas. They were the first living ones I’ve seen this year. Typically, I will begin to see them in August, but, this year, it is late September. They both looked healthy. The life of a male tarantula is one of being darned if you do and darned if you don’t. They are meals for tarantula wasp babies or a meal for the female tarantula after fertilization. I love them so much and feel bad for their fate, but that is how nature intended.

Some other good friends I have seen a lot recently are snakes. They are so important, and I protect them from getting picked off by raptors as much as I can. I try to scoot them off the cement or the roads into the grass or leaves so they are not as easily seen by the remarkable eyes of hawks.

One of the crucial elements of establishing a well-rounded pollinator garden is to ensure diverse plantings and plants that bloom at different times of the Spring, Summer and Fall. Although it is late September, I am still getting blooms on the plants. I was rewarded today with a sighting of two admiral butterflies. They moved so fast that I could not get a photo. I saw their distinctive markings and was overjoyed. They are larger than the other butterflies I have been seeing lately, which is fun.

A Heartfelt Goodbye to the Polaris

I gave the Polaris back to its rightful owners the other day. My neighbors have been incredibly generous with me, allowing me to use it for so many weeks. It has been a reliable friend making my work so much easier. I won’t lie; I miss the gosh darn thing. I am back to hauling my water with the Gorilla cart since the part for my electric ATV is still MIA from Canada.

I haven’t been on a vacation in years. This week, David and I were set to leave for the coast. We had the car packed, the bikes on the back and the dogs situated comfortably for the long ride. We drove to Hornitos, made the tight curve, climbed up the hill out of town and made our way down the winding road toward the vast expanse of the Central Valley. Just a mile outside of town, we pulled over on La Paloma Road to check the bike rack. It was fortuitous. –My hands are trembling as I write.– As I sat in the car, a single, large orange and black butterfly fluttered right over the car. It was a MONARCH! I grabbed my phone and bolted out out of the car like I was a 20 year old and ran down the dirt road as fast as I could, following the large erratic flutter, side to side, yet forward, of this magnificent creature. I ran until it flew over the ranch fence into the field, skirting the rangeland, just over the grass. My heart was racing, and I snapped three sad, far off photos. It was the best I could do. Then, my elation sunk in parallel with my heart. I was leaving. There were monarchs in Mariposa, along the rangeland, finally, and I was leaving town. David yelled to me to get into the car and lets go. Reluctantly, turning back every so often, as if I was a child again, called home too soon, leaving my joyful friends playing behind, I made my way back up the dirt road and got into the car.

I certainly wanted to leave town. The smoke and heat have been toxic to my body. It has been too many days of working hard in this situation. I wanted the clean, cool air of the coast. I wanted to see my siblings and make my husband happy to have the smell of redwoods in his nose. I was conflicted. Could I leave now after seeing this? Had I worked so hard since 2019, not seeing any monarchs, to leave now that there was a real, tangible chance to see them use this habitat? What if the watering system David constructed got a leak, and water did not make it to the milkweed or nectar and the plants died? A tear quietly rolled down my cheek as I ruminated. David, driving, caught this resigned defeat out of the corner of his eye. He grabbed my hand and said, “HB, do you want to go back home? We are only an hour and a half down the road. I am ok with it if you do. I know how hard you’ve worked.” I said, “Really? You would give up your beautiful trip?” He said, “Yes. I am totally fine with a stay-cation.” I said, “I love you.” He made the u-turn, and we started back for home.

I called my sister and brother to make sure they were ok. I asked, “Is it lunacy for me to cancel my vacation for a butterfly?” Both my sister and brother encouraged me to shift my plans. They said, in turns, “It would be crazy if you didn’t do all that work, saw a butterfly and cancelled your trip. You worked on this project for years, literally giving your blood, sweat and tears. We think it is crazy for you not to stay!” I promised to visit soon and hung up as David and I made our way across the Valley, the glorious Sierra foothills, and home, in our sights.